Who, in Uganda, is not familiar with the mud and wattle hut?
It is the most indigenous house for most, if not all, tribes in the country. Even though modernity has continued to fraze the African Traditional Huts, Most Tribes in Ankole have indeed continued to preserve the Traditional Huts especially in the rural areas – Commonly among the Bahima Pastoralists and the Batwa communities
Vernacular architecture is one that is synonymous with the African society and in this case, As we prepare for the second Edition of The Uganda Live Stock And Heritage Show We take you through the Rich and detailed History about the Traditional Huts of Ankole and What the Cultural heads and historians have to say about their existence and background.

Characteristics
One characteristic that was common to the architecture was the circular shape they took and all the materials were never imported but made locally in every region. The doctor says everything was indigenous and not borrowed from outside. However, during the succession wars, one group would borrow from another and during migration and settlement.
Generally, the huts would be small and simple in nature because they would be occupied by a single person or utmost two. John Bishanga one of the great Elders of Ankole, explains that long ago people used the huts for protection. They would only go to the huts to sleep in the evening just like the other animals.

Types of huts, according to ethnicities in Uganda

BAHIMA HUT
The hut is made in such a way that it rises from the ground in a straw dome. They use emiganda (strong sticks that are resistant to termite attacks), which are woven in a spiral pattern to create a basketlike skeleton. Then spear grass is used to do the thatching. Bedrooms are separated by woven sticks attached to poles within the hut. The huts are made strong because in the past their skeleton could be moved whenever ancestors shifted to new grazing areas. Another platform called orugyegye is used to keep the milk pots from the ground. A small platform is raised in front of the door way of the bedrooms, on which a small skin is spread. This one is meant for the seat of the wife, where she sits to receive the milk. 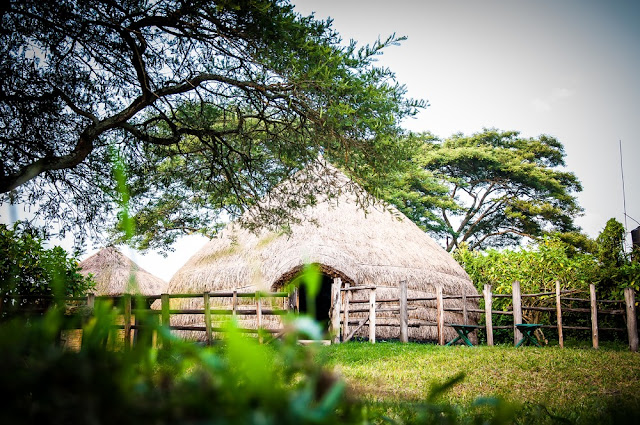 NKORE HUT
The huts are built of earthen materials, wood reinforced with wooden poles. The roof is thatched of spear grass (Imperata cylindirca), which is bound onto woodwork of poles in a conical shape. Right outside the entrance, two reed pillars adjoin the roof to the veranda, consequently forming a mild arch-like shape. The exterior is lavished with plain earth colours all through. In the interior, it is separated by an earth partition to form a sitting room and bedroom.

NYORE HUT
the hut is built of straw roof draped to the ground, concealing every bit of the hut, the front façade reveals the reed work. The threshold is carefully trimmed into an arch like a blond haircut. Between the arched roof and the actual entrance is a small veranda that is set off by two reed-laden walls. The interior is divided into two portions using a reed wall. Another distinct feature is fact that there is no mud wall in sight; the roof continues to the ground, creating an impression that the hut is made of fibre materials only. The house takes the shape of a bee hive with an apex at the top known as itunju.
The apex varies in height depending on the status of the owner; in the past, the greatest house in the land was the king’s court’s, which had a spear at the pinnacle. The part of the frame of the roof which was finished that night was raised on the three poles to such a height that goats and dogs could not reach. The house is divided into two almost equal portions by a reed wall, and it is impossible to see through from one room to the other. In the second room is the bed of the owner and his wife.
Peasants had to build their huts themselves, though at times one would call his friends to give a helping hand. His first task was to make materials available by utting poles and making ropes from papyrus stems, locally known as impotore. Alternative materials included palm leaves or banana fibres.

MADI HUT
The architectural design is distinct on two main features: the roof and the details on the wall. Firstly, the walls are characterised by in-built columns, which are spaced out between each other. The rectangular columns form partitions that are meant for decorative detail rather than buttresses.
Karimojong hut
The hut is round with a small passage by the entrance. At the centre of the hut is a dugout fireplace where a permanent fire burns – sometimes for a lifetime! The roof is made of grass with some tier around it. Because Karamoja is windy, there are poles put around the hut on the outside to hold it firmly. 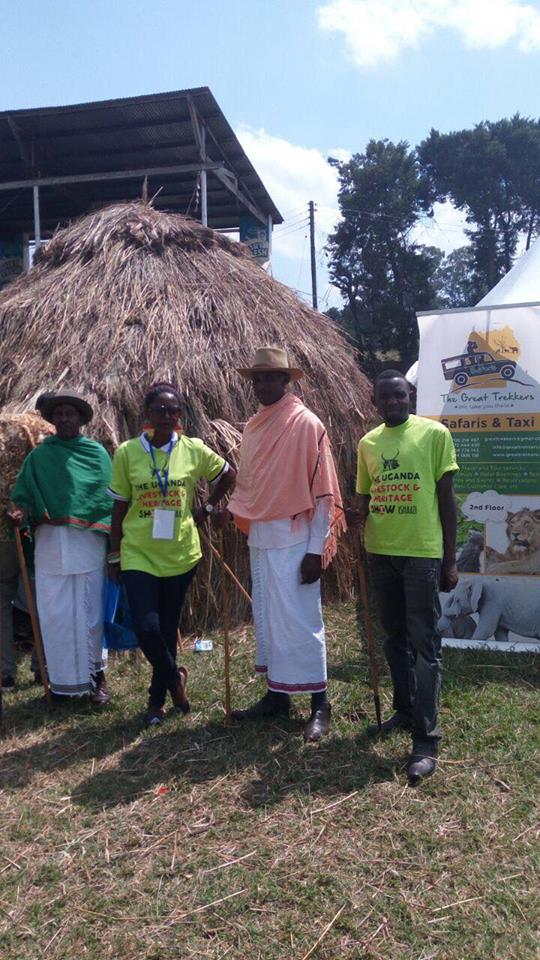 Ever wondered how it feels see 2 halves of the world? Wouldn't it be an adventure to stand with one foot in the northern hemisphere and one foot on the southern hemisphere of the world?
You can get this feeling by visiting the Uganda Equator. While Traveling with The Great Trekkers Safaris, Our Driver/ Tour Guide makes sure that you make a memorable Stop over  at such Points to take photos for a life time experience.

The Uganda equator is one of the most and well known landmarks in Uganda.” Equator is defined as the imaginary line that divides the world into two halves. The Equator is an imaginary line that is seen on maps marking the equidistant from the North and South Pole. Along the imaginary line of the equator, a magnetic needle has no dip and stabilizes in perfect horizontal position. You are able to stand with one of your feet in the northern hemisphere and the other in the southern hemisphere at this point; it is such an amazing experience to stand at both sides of the world. The sun rises and falls rather so fast at the equator, with equal days and nights’ length. The people around the equator experience only warm temperatures and tropical climate throughout the year and therefore quite hard to tell the difference between seasons.

Location
The Equator line passes through Uganda and the line has been marked at 72km along the Kampala-Masaka Road and other equator mark is located in Kasese District within the Queen Elizabeth National Park. 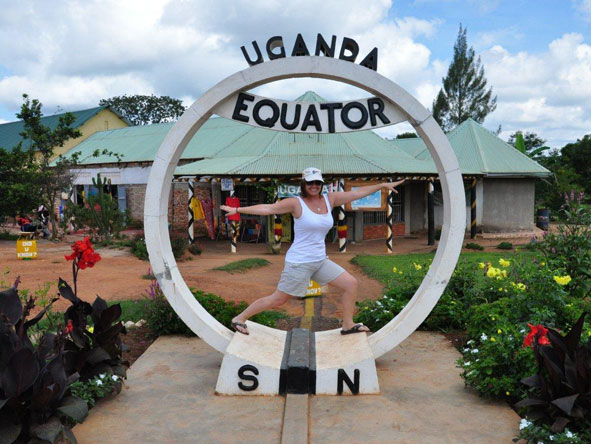